When you are looking for car restoration work on your dream car, you need to be able to rely on someone you can trust to deliver quality results. Here at Hilltoppers Speed Shop, we give you top-notch work.

Located in Dickson, Tennessee, our motto at Hilltoppers is “we build them right the first time.” Here at Hilltoppers, you will find quality, dependability, and good value in our work. We offer transparency, and our strong communication ensures that we are listening to everything you want. We are here to take care of your every restoration need, and we want you to feel confident that you can trust us. We take pride in caring for your car as if it was our own.

WE DO WHAT WE SAY

WE DO WHAT WE SAY

We stand by what we say and do. We believe in commitment and integrity when it comes to our restoration work and our word.

WE BUILD THEM RIGHT

WE BUILD THEM RIGHT

We believe in quality work. We specialize in what we do and we are great at it because we love doing restorations.

WE SEEK TO UNDERSTAND

WE SEEK TO UNDERSTAND

We communicate with our customers every step of the way, so they know they are getting exactly what they want.

WE BELIEVE IN TRUST

WE BELIEVE IN TRUST

While the project can change over time, we believe in keeping our customers aware of the project and getting their approval. 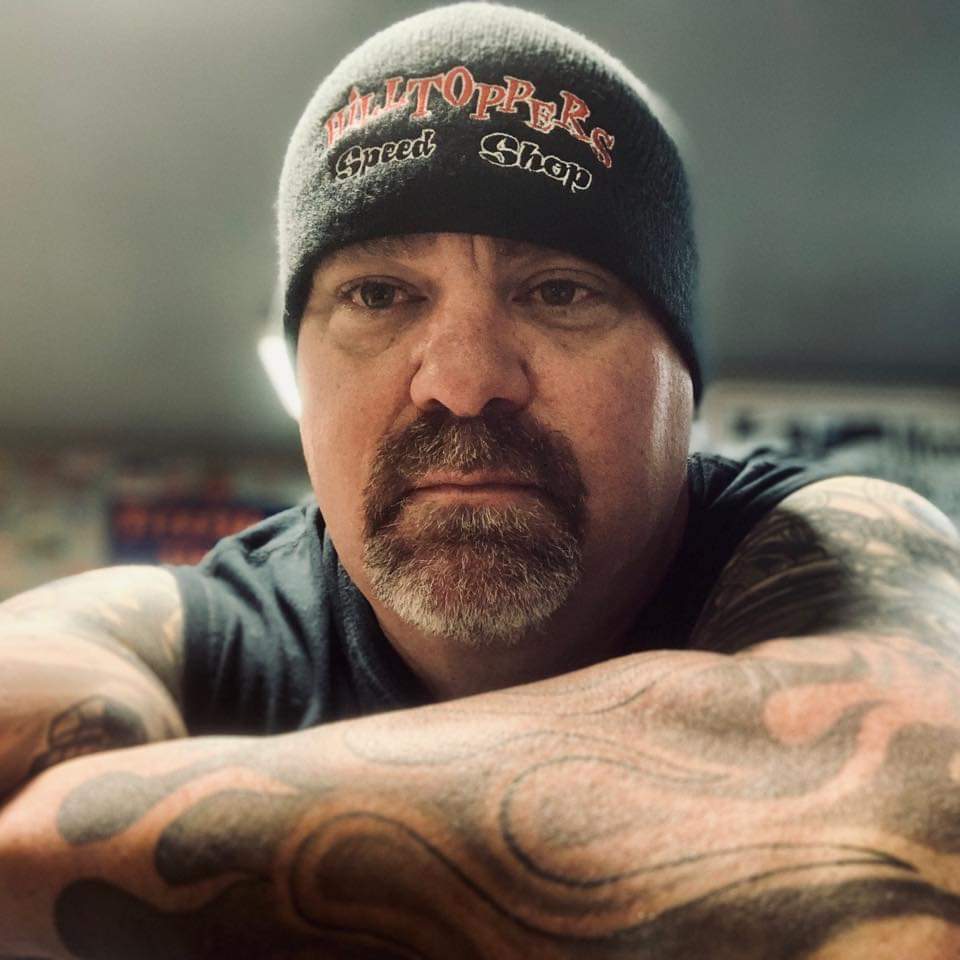 I have been a car nut since as far back as I can remember. I was born in Brunswick, Maine, where my father was stationed in the Navy. I grew up living all over the world as a military brat, attending 13 different schools in 12 years. Whether we were living in Morocco, North Africa or Somersworth, New Hampshire (home of the Somersworth Hilltoppers), just to name a few, my father was into cars and turning wrenches. He must have passed that gene to me. I continued to follow my father’s footsteps and joined the Navy in 1986. I spent 10 ½ years flying in helicopters as a Naval Aircrewman/Rescue Swimmer accumulating almost 3,000 total flight hours.

At age 42, I decided to attend Law School at night while I continued turning wrenches during the day. When I graduated from Law School, with the greatest educational experience of my life, I couldn’t give up my passion for cars and decided to put my new education to work, not as an attorney, but as a small business owner.

In 2017, I opened up Hilltoppers Speed Shop to restore and build cars. While I turned my own wrenches over the years, other shops did the bodywork and paint. As a customer, I often times felt cheated at the end of an expensive build. My goal is to give our customers a better value for their hard-earned dollar. I have a great team working with me and consider myself very fortunate! The talent at this shop make Hilltoppers what it is today. 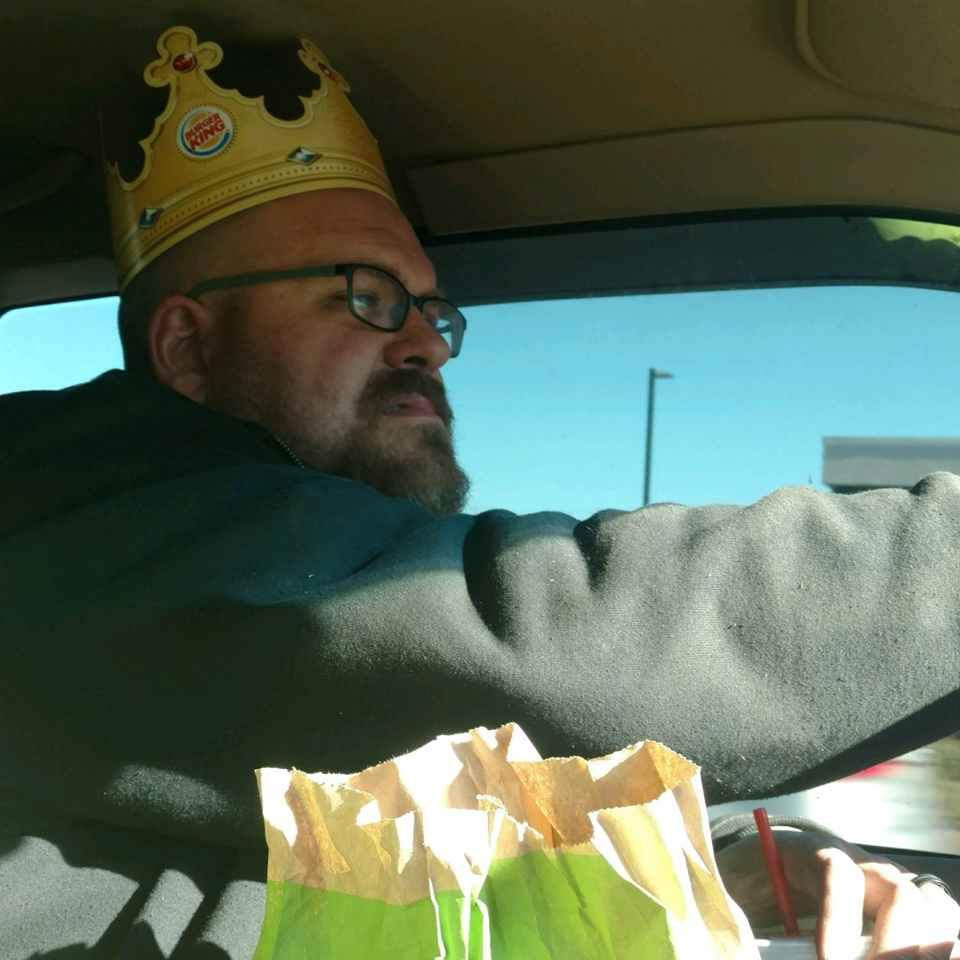 From there, it only got better. I was able to move into the custom side of restoration; fabricating parts from scratch and applying new technology in older vehicles to improve upon the original performance, appearance, and drivability. Essentially making them better than when they were built.

My travels around the world have allowed me to see automotive history and work on some really cool restorations. I was born a Navy Brat in Keflavik, Iceland and grew up in South Texas. I have moved around the US, spending most of that time in California and now in Tennessee to stay.

There are three very special people in my life, my wife Kris and my two beautiful daughters. When I am not spending time with my family and friends, and of course my dog, I boat occasionally, but work on cars, cars and more cars! 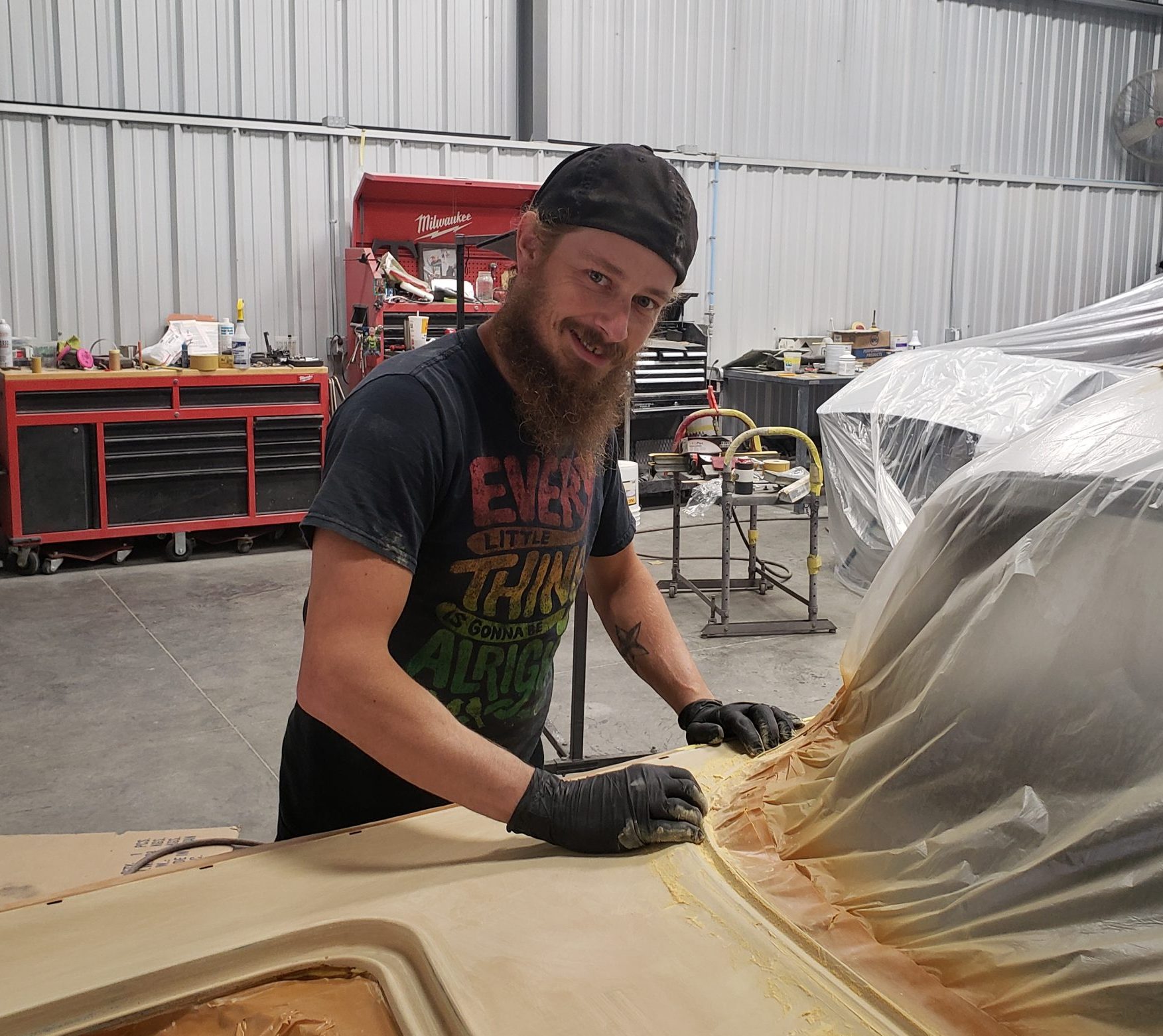 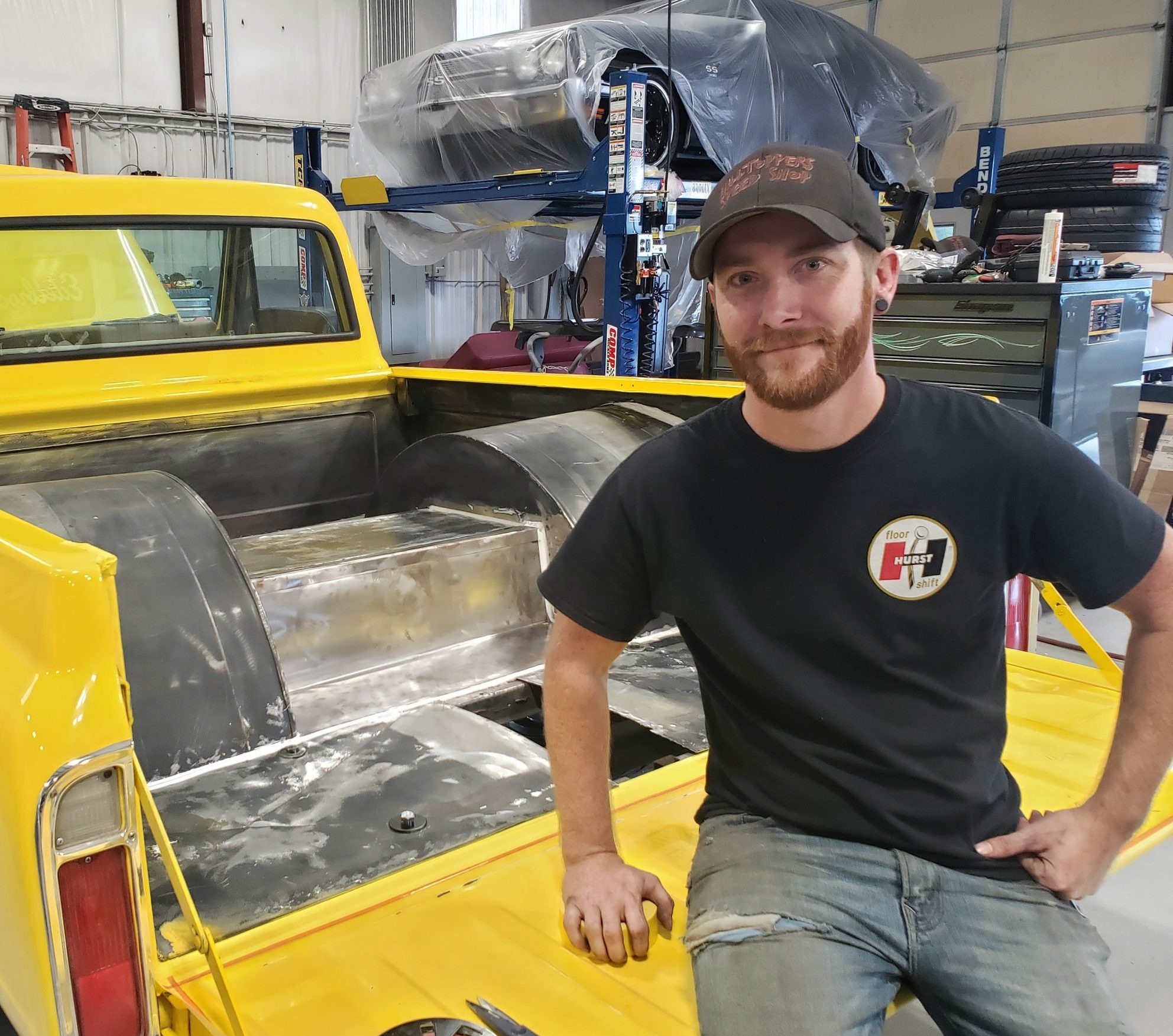 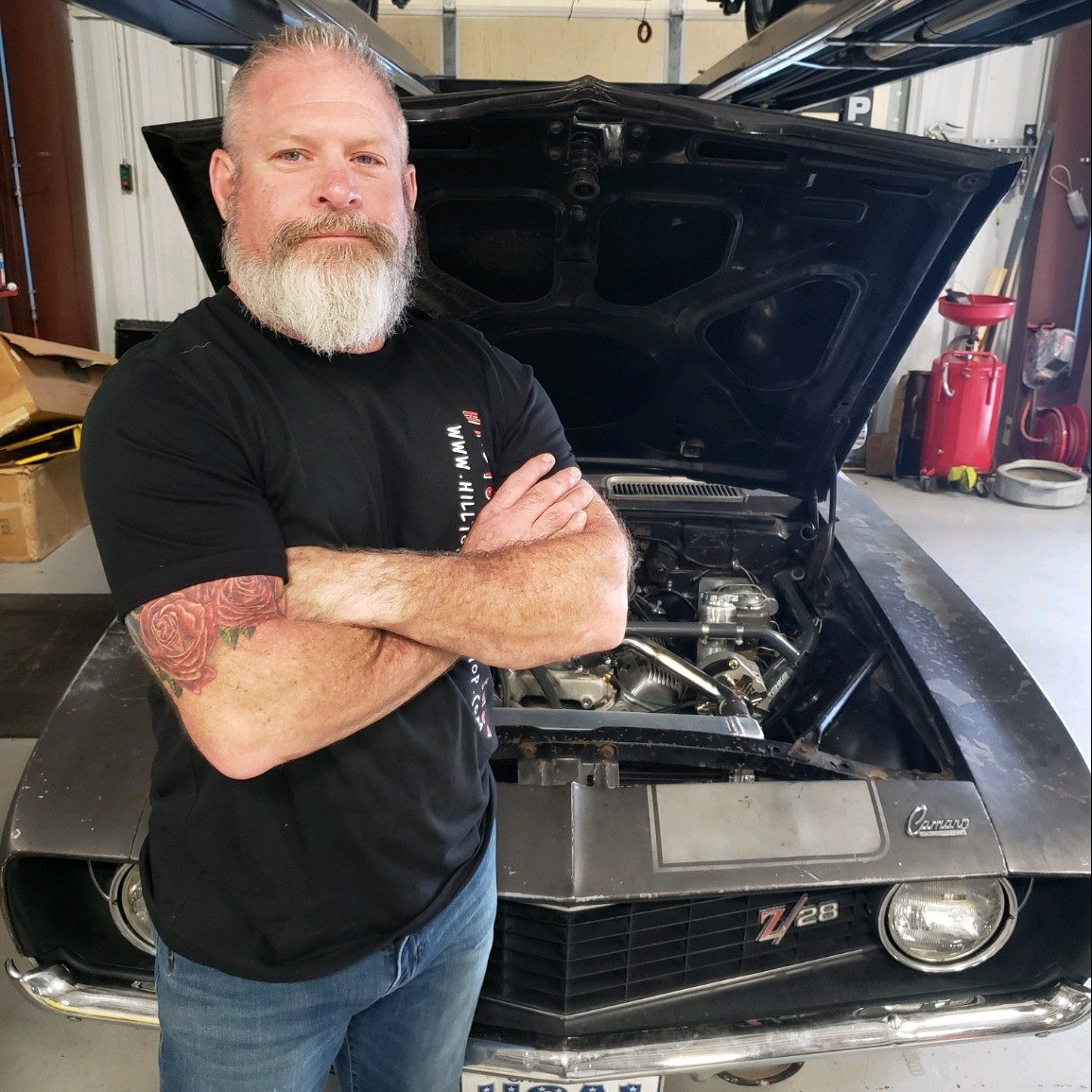 In 1973 I was born in Beaumont Texas, which is the area of Texas that I grew up.  Spent most of my teenage years in a little town called Orange Texas right on the border of Texas and Louisiana.  I attended high school at Little Cypress Mauriceville, where I lived Friday Night Lights.  I had two loves in my life at that time and that was football and hotrods.   I have always had a love for hotrods but couldn’t afford one and always had to fix what I was driving.   I knew that I wanted more out of life so leaving the small town was my only hope.

I left for the Navy on February 23, 1993, on a flight to California.  This was the first time in my life that I had ever been out of the state of Texas and Louisiana or ever been on a plane.  I went to bootcamp in San Diego Ca, I graduated top of my class and was giving the option to pick a job that I wanted to do.  The recruiter asked, “if I knew how to work on the brake systems of a vehicle” and I answered, “of course I do”.  He then said, “well how would you like to work on hydraulics on aircrafts”, I responded with “that sounds cool”.  I left bootcamp and was sent to school for hydraulics.  I graduated hydraulics school and the Navy sent me to a specialty school to work on H-60 helicopters.  After completing that course, the Navy sent me to another school for paint and finish.  Once all the schools were completed, I was sent to my squadron HS-15 in Jacksonville Florida.  I spent the next 5 years at sea on a few different aircraft carriers traveling the world and earned my Navy Veteran status.  I did a total of 8 years of serving my country.

After the Navy, I went to work for a Civil Engineering firm doing Computer Aided Design for 8 years.  From there I got a Job working for Napa doing Tools and Equipment for 2 years.  In 2009, I moved to Nashville Tennessee to become a Metro Nashville Police Officer.  I spent 7 years working the streets of Nashville doing undercover drug bust and gang activities.  In 2015, I transferred to a specialty unit called Mounted Horse Patrol (yes, I rode a horse downtown Nashville).  In 2019 I had a life altering work related injury that ended my career as a police officer.  I hung up my handcuffs and decided to pick up a wrench.

Coming to work for Hilltoppers Speed Shop is a dream come true of mine, I get to be around classic cars and hotrods!  When you get to do what you love, it’s not work.

I am John Doe

I am John Doe